Meet Marianne Colgrove, Reed College Deputy Chief Information Officer and beloved JCWC board member! Her love for Johnson Creek is so strong that she is also an important contributing member for the volunteer group Friends of Tideman Johnson Natural Area.  Read below a piece she has written for our quarterly newsletter in which she shares some trials and successes from restoration efforts at this picturesque park in southeast Portland…. 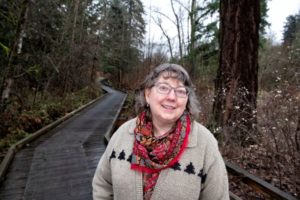 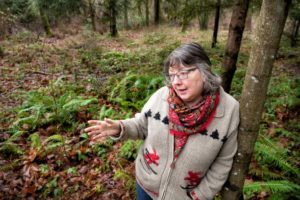 “You might miss Tideman Johnson Natural Area if you’re cruising by on the Springwater Trail, but for many of us — people and wildlife alike — it is a treasured urban oasis in inner SE Portland. Though only 6 acres, Tideman Johnson hosts numerous ecosystems surrounding Johnson Creek, including a beaver-enhanced riparian zone, spring-fed wetlands, a shady woodland, and drier upland zones. Each of these habitats presents opportunities to restore distinct plant communities and associated wildlife. Besides the beavers, we know the creek hosts endangered salmon and steelhead, otters, and numerous aquatic macroinvertebrates.  Tideman Johnson is also frequented by coyotes, deer, and a tremendous array of birds, including screech owls, barred owls, herons, hawks, eagles, and many of the woodpecker tribe.

The Ardenwald-Johnson Creek Neighborhood Association has long cared for Tideman Johnson Park through periodic community events. In 2007 we sought to establish a permanent community stewardship group to build on the restoration work completed by the Bureau of Environmental Services through the Lents Interceptor project. That project reversed decades of erosion that had swept away 5-feet of creek bed, exposing the sewer pipe beneath and destroying healthy stream habitat. Benefits of the project included reintroducing tons of boulders, logs and gravel to restore natural creek habitat, reconnecting Johnson Creek to flood channels, and building a boardwalk path through sensitive wetlands. 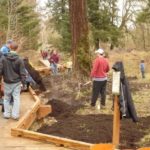 Before & during construction of the boardwalk facing east. 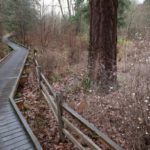 After construction of the boardwalk facing east. 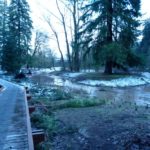 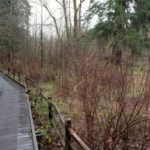 While the BES restoration brought critical improvements to Tideman Johnson, months of earthmoving with heavy machinery left soils bare and compacted. Swaths of the park that were outside the project scope were smothered by English ivy, Himalayan blackberry, and other invasive species. The time was ripe for the Friends of Tideman Johnson. Lisa Gunion-Rinker and I partnered with community members, Portland Parks & Recreation, and the Johnson Creek Watershed Council to write a successful Community Watershed Stewardship Grant and launch our fledgeling Friends group.

The Friends of Tideman Johnson gather 8 months a year on the first Saturday. We’ve developed a natural rhythm to our work: remove invasives, plant natives, mulch to preserve moisture and suppress weeds, and repeat. Through ongoing management and persistence, we make real and steady progress. In the twelve years since our start, the Friends of Tideman Johnson have successfully transformed the park into a thriving natural ecosystem. Ivy that carpeted the woodland has been replaced by sword ferns and trailing blackberry, and an abundance of native wildflowers have emerged. Free-standing conifers now have a diverse understory of flowering shrubs that provide sanctuary for wildlife and food for pollinators. Creekside plantings reduce erosion and help cool the creek. Native ash and alder have volunteered in the engineered channels created by BES, which helps slow down flood waters after storms.

Several factors contribute to the success of the Friends of Tideman Johnson, but most importantly:

Collaboration is critical. We collaborate with Portland Parks & Recreation to develop an annual stewardship plan that guides our work. PP&R provides native plants by the thousands, mountains of mulch, and snacks & tools for our restoration events. The Johnson Creek Watershed Council provided fiscal sponsorship for our early grants, as well as ongoing recruiting and event support.

Volunteers are our lifeblood. We make volunteering fun! On any given month we’ll have a mix of regulars and “drop-ins”: neighbors, JCWC stalwarts, students, and families who want to expose their children to the great outdoors in a fun and supportive environment. 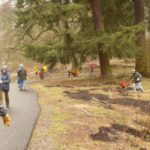 Before Friends of Tideman Johnson restoration plantings at the base of some stately Doug Firs. 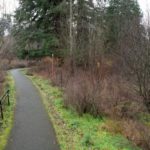 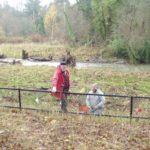 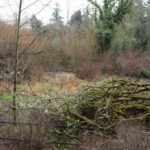 Thank you Marianne, Friends of Tideman Johnson, and all the volunteers for the work that you do. Because of your restoration efforts, Tideman Johnson Natural Area is making (clearly visible) progress towards being a restored, healthy and safe stretch of the Johnson Creek mainstem!

Thanks to Bruce MacGregor for the fun photoshoot of the ‘after’ pictures of the site as well as the pictures of Marianne above! Check out more of his work HERE.