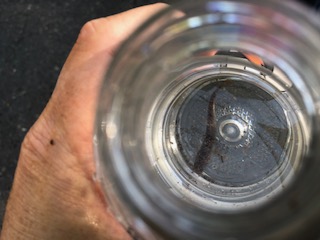 A new visitor was seen in the North Fork of Johnson Creek this week; a juvenile cutthroat trout!  But cutthroat trout can be found in various tributaries in Johnson Creek, what is so exciting about this one?  We have been working with our partners to restore fish passage throughout the North Fork tributary since 2015, and are nearly finished.  Prior to beginning this effort, a thorough fish sampling effort was led by Multnomah County and electrofishing surveys did not find any native salmonids (salmon, steelhead or trout) anywhere in the North Fork of Johnson Creek.  An evaluation of fish passage barriers within the North Fork identified seven in need of replacement/retrofit and to date five have been addressed.  Last December, JCWC and Multnomah County applied a new technology to retrofit the culvert under 262nd avenue in Gresham.  This week, while JCWC was checking on the performance of the baffles used for this retrofit we noticed that the North Fork flows are approaching their summer lows, and a small puddle is left immediately upstream from this culvert.  While checking out the baffles, we saw movement in the puddle and to our amazement it turned out to be a 3 inch long juvenile cutthroat trout!  This trout most likely had moved upstream from Johnson Creek seeking colder water to spend the summer in.  Fish passage remains blocked at the culvert under Highway 26, though that will be remedied this summer, so this juvenile had to have come from somewhere downstream and successfully moved up through the 262nd avenue culvert!  Seven months ago this culvert was a barrier to fish passage, and this week we have documented success!  For more information on this project, or other work in the North Fork see our new archives or visit us on Facebook!