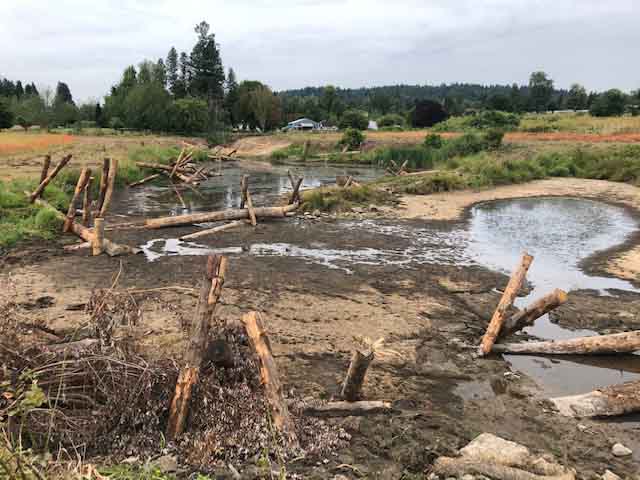 That is, the construction phase of restoration has been completed.   For the past several years JCWC has been working with the Centennial School District to restore a 900’ section of Mitchell Creek by removing 2 fish passage barriers and a 1 acre inline pond.  The pond, which monitoring has shown to increase water temperatures in Mitchell Creek by as much as 14 degrees Celsius, was created over 40 years ago when the property owner constructed an earthen track for racing horses and ATVs.  This track also crossed Mitchell Creek in 2 locations, ultimately creating 2 fish passage barriers.  Culverts installed in the 2 crossings were undersized and overly steep, which contributed to downstream channel erosion that creates a disconnect between the stream and the culvert.  Couple the physical disconnection with high water velocities (also caused by the steepness of the culverts) and the inline pond effectively cuts off upstream fish passage and creates a source of very warm water (in part caused by long water retention times outside of the rainy season).  In 2014, a grant from Metro funded the initial engineering design and JCWC was on the way to addressing this top-priority fish passage and water quality project.

Funding from the EMSWCD and Oregon DEQ supported our permitting and final design work, and by February of 2019 all of our permits we in hand and the project was put out for competitive bid.  Nine contractors were invited to our mandatory pre-bid site showing, 2/3 were MWESB companies, and the bids we received reflected the competitive spirit!  Biohabitats, Inc. was the successful contractor and thus began the detailed logistical process of contracting and pre-construction.  One unique element in this part of the process was the timing of our construction work.  Typically, inwater work in the Johnson Creek watershed is allowed to begin July 15th, and must be completed by August 31st of each year.  However, several environmental factors and conditions unique to this site allowed for a variance in the inwater work timing to allow us to start the project in late June!  We took full advantage of this opportunity, and were treated to some interesting anecdotal observations as a result… more on that later!

Restoration work began by first removing brush from the portions of the race track around the creek crossings, then removing the downstream culvert to dewater the pond.  ODFW was onsite prior to and during the dewatering for fish salvage and also to help ensure minimal environmental side effects of our work.  Once the downstream culvert was removed, and the work area dewatered we constructed an engineered stream channel, complete with pools, riffles and 2 log structures.  Moving toward the upstream culvert crossing, we began installing large wood in various configurations that will both provide wildlife habitat and help with stream channel formation.  The upstream culvert was then removed, and a second engineered stream sequence was constructed where Mitchell Creek enters the property.  Finally, the remaining large wood structures and piles were installed on the East side of the “pond”, and the construction site was touched up and seeded with native grass mixes.  Funding for the restoration work was provided by the Oregon Watershed Enhancement Board, PGE&TNC, USFWS Willamette Valley Refuge Complex, mitigation funding and a new grant from Metro Nature in Neighborhoods to support revegetation efforts!

Some interesting observations that may not have been witnessed during construction later in the summer included a dynamic shift in bird activity and species presence.  As soon as we started work the cedar waxwings responded in what can best be described as harmonious chaos!  We saw 4 species of shore birds immediately following the drainage of the pond, including a greater yellowlegs, spotted sandpiper, killdeer and another unidentified sandpiper (either least or semipalmated).  We also had a couple rain events that gave us a sneak peek at wetland recharge and the relationship between the stream and wetland area (pond footprint).  I, for one, was pleasantly surprised how little rain it took to recharge the wetland area and see it’s connection with the newly-forming stream channel in the footprint of what had been the 0.7 acre pond.  So much to look forward to as we head towards Fall knowing the rare opportunity to watch a stream reconnect with its floodplain and reestablish itself is a few short minutes away!