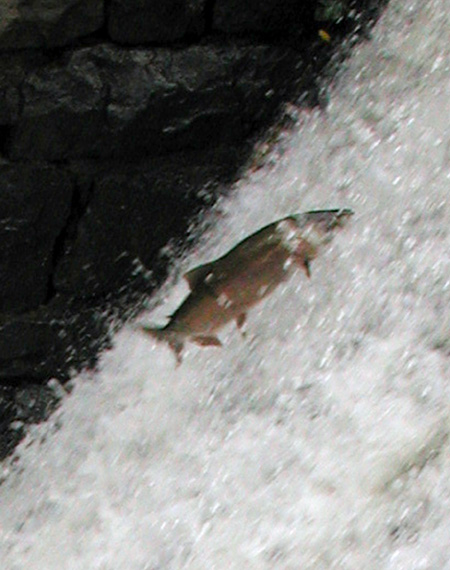 Salmon are integral to the Pacific Northwest. These amazing fish make extraordinary migrations from streams to the ocean, then back again to spawn. They also play important roles in the cultures and histories of people who have lived here for thousands of years. Since 2011, JCWC volunteers have been studying the creek for coho and Chinook salmon, gathering data that supports our restoration efforts.

Salmon populations in Johnson Creek have changed dramatically in the last century. Historical Johnson Creek coho runs once numbered as many as 5,000 adult fish each year, but as the area around Johnson Creek became more heavily developed, coho runs declined rapidly. Chinook salmon similarly suffered–by 2000, Lower Colombia River coho and Chinook were both listed as threatened. Only a handful of each are spotted in Johnson Creek annually.

To better understand salmon in Johnson Creek, JCWC worked with Oregon Department of Fish and Wildlife (ODFW) to design a community science program in which volunteers could help gather salmon data. ODFW also surveys fish in the creek, but their surveys only cover 2-4 creek miles each season. Our program trained volunteers to use ODFW protocols, thus expanding the surveys to cover far more ground. Volunteers performed a few test surveys in 2011, and each year since 2012, over 50 volunteers have performed salmon spawning surveys. This volunteer effort has given us a much better picture of salmon activity, which helps inform our restoration projects.

Each year, we select several mile-long reaches to be surveyed by volunteers. Some reaches are surveyed every year, while others change from year to year. Volunteers are trained in early fall by fish biologists from ODFW, who teach them how to identify coho vs. Chinook fish and redds (spawning nests). Volunteers are then assigned mile-long reaches and walk those reaches in pairs, with each reach being surveyed each weekend through the fall months when both species spawn. Surveyors photograph any live fish or redds they encounter, taking notes and reporting all sightings to JCWC staff. Fish carcasses found during surveys are transported to the JCWC office, where staff determine age, sex, and spawning activity of the salmon when possible.

Our most recent surveys, in 2020, were conducted over about one month from November to December. Surveyors volunteered for 1 to 2 sessions each. We couldn’t have done it without them!

The primary objective of this research was to identify the growth and sightings of the salmon population within the Johnson Creek Watershed. This data was collected with community science outreach and submitted on a google form. The form expressed minimal salmon sightings as only two sightings were recorded. The study presents a series of limits as volunteers reported high water levels making the reach difficult to navigate, as well as diminished visibility. In comparison to the previous year, 2019, the salmon sightings were generally consistent as there appeared to be a short number of sightings. There was one redd located in reach B, Foster Floodplain. An unknown fish sighting was located in reach E, Tideman Johnson Park. Both of these sightings are in Portland, Oregon. Due to COVID-19, surveyors were trained remotely and were sent in groups based on households, this decreased the total amount of volunteers surveying. 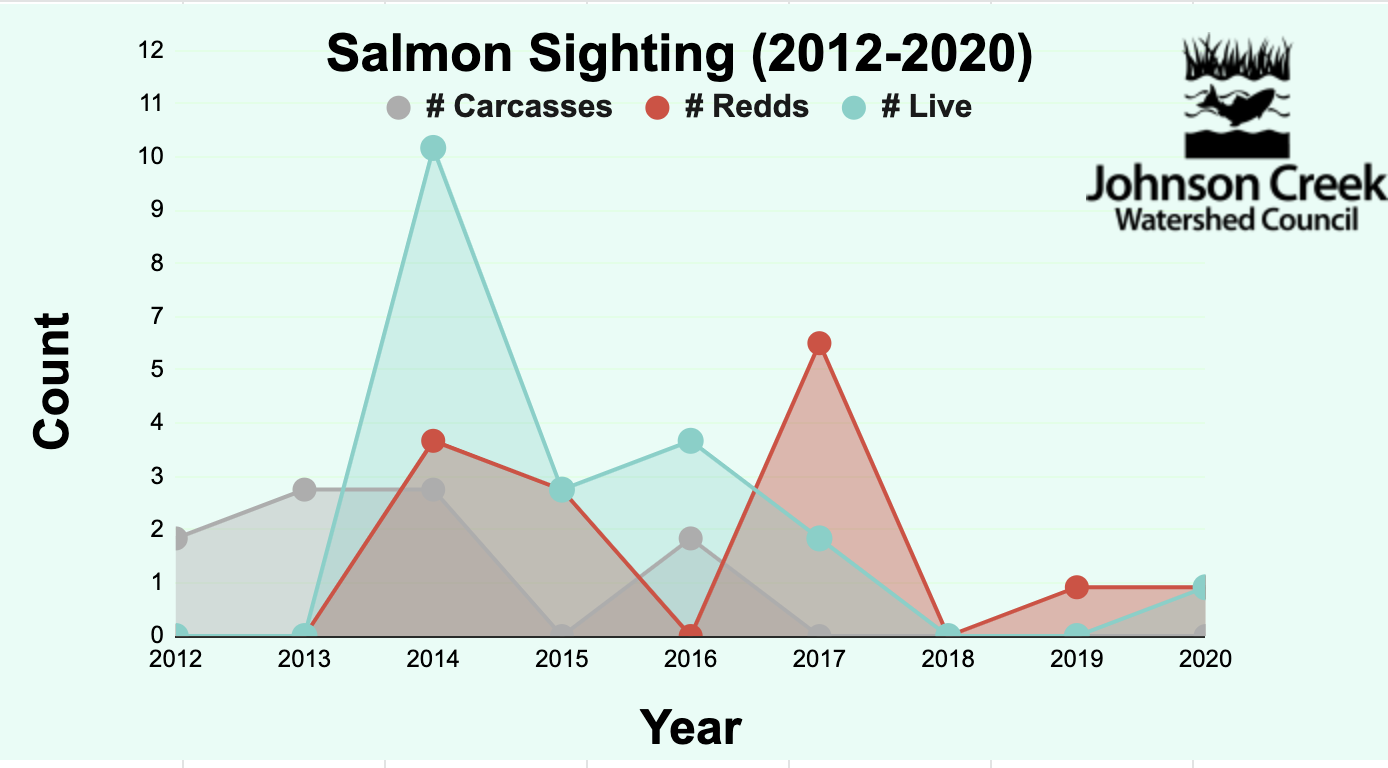 Coho salmon spend their first year in freshwater, then travel to the ocean in the spring, where they feed and grow for the next 16-20 months. It is at this stage that they are known as smolts, and are identifiable by their silver color. After their first summer at sea, some males that have reached sexual maturity early (known as jacks) return to freshwater. The rest of the fish return to freshwater at about three years old to spawn.

(While Chinook are also present in Johnson Creek, they are rarely seen anywhere except the lowest reaches of the creek. Coho are found throughout the entire system; for simplicity, this section focuses on coho.)

From freshwater to saltwater

Coho salmon are anadromous. This term refers to fish that are born in fresh water, travel to the ocean to live their adult lives, and return to fresh water to spawn. In order to undergo this major change in conditions, the fishes’ bodies change in appearance and structure…all so they can reach their natal streams. Incredibly, salmon find their way to the same location where they hatched years before – very impressive! Scientists are unsure how salmon navigate back to their “home,” but it has been suggested that they use the earth’s magnetic field to orient themselves.

Most salmon species, including coho, expend their last bit of energy spawning. Their carcasses remain in the stream to feed other animals and plants, one of the ways they are vital to Pacific Northwest ecosystems: they bring nutrients far upstream from the ocean. (When carcasses are removed from Johnson Creek by our volunteer surveyors, JCWC staff return the carcasses to the creek after processing them.)

What do coho salmon eat?

Other salmon species in our watershed

Chinook salmon appear similar to coho while at sea, but when they are spawning they have slightly different coloring and are larger than coho. They tend to prefer deeper streams and bodies of water as compared to other salmon species–in Johnson Creek, they stay in the lower reaches and near the mouth.