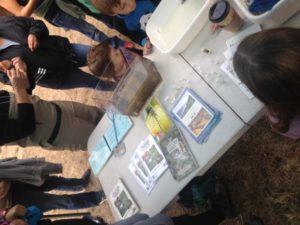 Envision a park scene, buzzing with volunteers and staff setting up folding tables that will be home for the next few hours to crawly creek friends known as aquatic macroinvertebrates. There are arts supplies, water bug coloring books, dress-up butterfly wings and aquariums being arranged at recreation stations to welcome dozens of families from Multnomah and Clackamas Counties. Anticipation and excitement begins to replace any previous worry of rain. The stage is being set for Science in the Park, a first-ever event of its kind planned by JCWC in partnership with North Clackamas Urban Watersheds Council (NCUWC).

The morning of Sunday, September 16th over 80 community members joined us at Mill Park in Milwaukie to learn why macroinvertebrates play an important role in riparian ecosystems. But just what is a macroinvertebrate? If you’ve ever caught a crawdad, found a freshwater mussel or seen a tiny dragonfly nymph propelling itself through the creek, then you’ve met at least one in your life! When we break down the term, ‘macro’ means large and ‘invertebrate’ refers to any organism without a spine. So basically, an aquatic macroinvertebrate is any creature living in the water that is visible to the human eye and has evolved without a spine. Through art, story, play, and a hands-on macro-invertebrate identification station dozens of families learned that the stormwater effects we have in our homes (e.g. washing a car, planting a rain garden, or disposing of kitchen grease), have a very real effect on even the tiniest of creatures that call nearby waterways home.

Science in the Park began as an effort to engage more families and young children with watershed science education. An extension of JCWC Science Talk series, the event was an effort to create community next to the creek. Providing hands-on and fun activities makes environmental education more salient (easier to absorb), thereby laying the foundation for water-wise future generations. At the end of the day much appreciation was expressed by parents that an event intended for children was on our calendar, with one guest even remarking, “THIS is how you create community!” After such an enjoyable and impactful afternoon we look forward to making Science in the Park an annual event for JCWC and NCUWC. Ideas are already brewing to incorporate more organizations, educational materials to engage guests of all ages, storytellers of all backgrounds and specialties, and new ways to teach and play in the name of aquatic environmental education. Major thanks to sponsorship by Clackamas Water Environment Services and for being there the day of. Our partners North Clackamas Urban Watersheds Council, North Clackamas Parks and Recreation District, Celeste Mazzacano of CASM Environmental and storyteller Will Hornyak made the day a smashing success. Check out JCWC Facebook photo album for fun photos from the day and stay tuned for more science in the park!