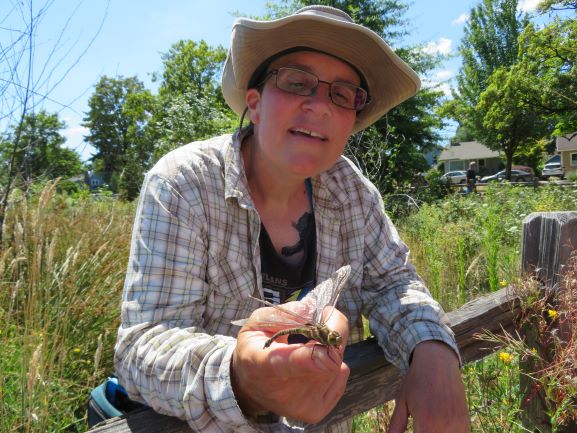 Above: Celeste, the dragonfly whisperer, admires a catch at the Dragonfly Surveyor Mid-season Potluck in 2018 (photo credit: Bonnie Comegys).

Did you know Dragonflies spend the majority of their life underwater? They spend the juvenile stages of their lives as what are called ‘nymphs.’ Dragonfly and Damselfly nymphs rest on the creek bed, propel along the bottom of the stream, snack on mosquitos and even eat tadpoles when they get the chance! Some species spend up to two years as nymphs before they are ready to take flight. As adults, they have some of the longest migration patterns on record and finding bodies of water to rest and recharge at are pivotal to their survival. Aquatic and riparian plants provide a way for them emerge from the water before becoming adults, as well as act as an anchor for the eggs they lay after migrating. It is clear to see that clean water is of the utmost importance to dragonflies no matter what life stage they are in.

The presence, absence and behavior of dragonflies and damselflies is so sensitive to water quality that they are referred to as what we call indicator species. Many insects, plants and animals are so sensitive to their environment that they reveal clues about the health of the ecosystem. When organizations like JCWC hope to restore aquatic ecosystems, it’s important to look to clues from indicator species before we begin. For example, let’s say that two years ago dragonfly populations were booming on Crystal Springs Creek. Fast forward to one year ago, and maybe an inline pond was installed upstream from that creek and raised the water temperature. Fast forward again to this year, and there’s a chance we might see drastically lower dragonfly populations at the same location because the water temperature is too high for dragonfly nymphs to live. Indicator species (AKA bioindicators) reveal trends like this, and recording them means scientists are more informed as to what pollutants or changes in the ecosystem are causing harm to surrounding natural areas. Through scientific processes, we are able to determine what restoration steps to take to a healthier, happier and more biodiverse ecosystem.

This will be the third year of dragonfly and damsefly surveys at JCWC, and surveys at the Centennial Pond site are of special interest. In the coming years, almost all aspects of our restoration practices will take place at this site! Culvert removals, invasive removal, revegetation, continued monitoring in our community science program, and more will all contribute to our legacy of ecosystem enhancement. Participating in this year’s Dragonfly and Damselfly Surveys is one way you can help ensure the Centennial Pond site (and two others) are restored in a good way. Register HERE for Orientation on Saturday, June 1st from 9am-4pm. We’ll meet at the SMILE Station in the Sellwood neighborhood, and move to Westmoreland Park for field practice in the afternoon. One catch at field practice and you’ll be hooked, we promise!

How the surveys work: JCWC staff provides you with training and gear, volunteers work as a small team to conduct surveys of selected sites in the Johnson Creek watershed. Surveyors commit to four surveys from June through September (one survey per month). Each survey takes approximately two hours, not including travel time , and connects you with other environmental enthusiasts and professionals. These surveys are a favorite staple in JCWC’s summer programming.

Funding for the JCWC Community Science Program comes from Portland Bureau of Environmental Services and the East Multnomah Soil and Water Conservation District. This year, we’re thrilled to be partnering again with Celeste Searles Mazzacano of CASM Environmental! Sign up today to participate and visit our Dragonfly Science webpage for information.