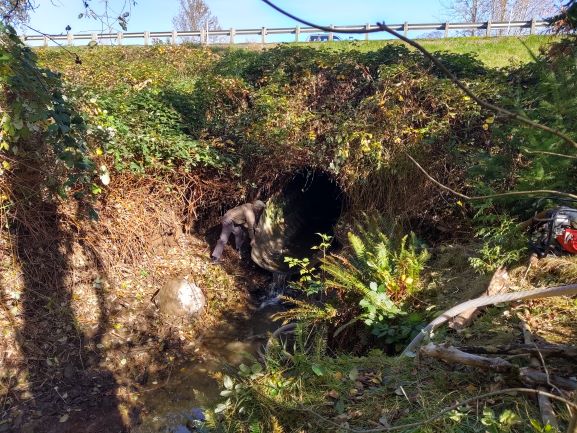 An initiative that began in 2015 is now one step closer to being a reality!   The North Fork Open Migration project was conceived as a multi-partner collaboration aimed at eliminating all 7 barriers to fish passage in the North Fork of Johnson Creek.

In 2016, East Multnomah Soil and Water Conservation District replaced or removed three legacy culverts on their Headwaters Farm property that were barriers.

In 2017, JCWC addressed the furthest downstream barrier near the mouth of the North Fork when we replaced the culvert under the Springwater Trail.

In 2018, JCWC made history becoming the first practitioners in the Western U.S. to utilize a “flexi-baffle” culvert retrofit technology developed in New Zealand, which we installed inside the culvert under 262nd Avenue-  between the Springwater Trail and Highway 26.

With one week left in our variance for extended inwater work this year, the final permits were issued and work was completed on addressing the culvert under state Highway 26.  Whew! Restoring fish passage under Highway 26 meant addressing two key challenges: first, the culvert outlet was nearly 12 inches higher than to pool immediately downstream. Second, the culvert is nearly 200 feet long with almost zero fall from inlet to outlet.  What this means to fish is that first, they would face a tall jump just to enter the culvert, and second, there was often only shallow water in the pipe so if they could have gotten into the pipe they would have a tough time swimming upstream.

New Zealand baffles to the rescue again!  The second issue, shallow water in the culvert, was addressed by installing 15 of the flexible culvert baffles to slow and deepen the water.  The first issue was addressed by building an engineered riffle in the creek channel about 40 feet downstream from the culvert to create a back water effect to allow fish to simply swim into the pipe without a jump.

As of October 29, 2019, the culvert under Highway 26 is passable to migrating fish and the North Fork Open Migration is one step away from completion.  Multnomah County is scheduled to replace their culvert under 267th avenue in 2020, and the entire North Fork of Johnson Creek will once again be open to migratory salmon, steelhead and trout!

The Highway 26 project was completed in partnership with, and funding from, the Oregon Department Of Transportation, Oregon Watershed Enhancement Board, and East Multnomah Soil & Water Conservation District. Thank you partners!