Johnson Creek Park Stewards are volunteers who commit to working a minimum of two hours each month at selected green spaces for a calendar year. After training with JCWC and Portland Parks, the Stewards work to remove invasive species like blackberry and ivy and pick up trash and debris. In general, they help keep an eye on these special urban forests. The Park Stewards report back to the Johnson Creek Watershed Council and PP&R while they monitor wildlife and help prevent the spread of other unwanted plants.

These are some of the excerpts from their “diaries” in 2013. They speak honestly and opening about their (sometimes challenging) experiences.  If you have interest in becoming a Park Steward beginning January 2014 please contact JCWC’s Volunteer and Outreach Coordinator Amy Lodholz at [email protected] See the Stewardship job description here. 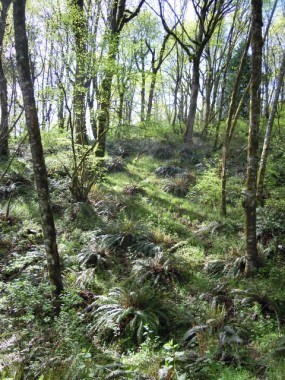 “Spent some time wandering and found an unmarked ivy patch by the fuel oil tank at the old home site.  Pulled all I found and also dug out blackberry crowns on the hill above the old home site.  Just a small patch I found under some dead alder (400 sq ft)…..it’s already getting tough to spot between the nettle and salmon berry…..  There’s also ivy at the bottom of the ravine, spreading up from the houses below…Lots of wildflowers coming in – Trillium, Clarkia, violas.”

“I worked along the hill in Area 1 at the end of 142nd and wandered up and down as I worked my way west pulling ivy until reaching the creek.  Someone else [Park Steward Bob Marshall] had started clearing a spot there and I extended that work but there was a large amount of ivy left to be pulled.  There’s also a substantial bit of ivy over the edge and down to the creek.  There is also quite a pile of garbage and an old truck chassis near this area.  Crazy thing though, at one of the two locations I got a real bad batch of poison oak and didn’t recognize it right away.  Its been a real hassle too!  Watch out for it!” 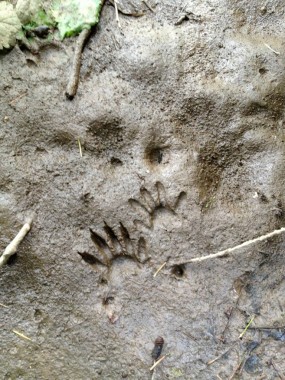 “I traversed the creek and surrounding uplands. The habitat is remarkably diverse with abundant native plants in flower: Saxifrage, Yellow Violet, Trillium, Spring Beauty and Salmon Berry. Found and pulled approximately 100 blackberry plants. I didn’t find much ivy until I found the mother load where a tree had fallen over a private fence. The tree is covered with ivy with the vines being over ¾” thick. I will take shears next time and cut the vines at the base so the ivy dies. Pulled what I could that was growing onto the Natural Area, a large arm full. Coyotes have been extremely prevalent this year and appear to live and hunt on Area 1 and 2 as well as on private land. Also have a healthy deer population and have seen many animals including a 6-point and 4-point buck. Waiting to see the fawns.”

“Today was my first trip weeding at the site.  I went to the north part of the site and pulled and dug Clematis and Blackberries.  A lot of new plantings had been done since I was last there.  The Bewick’s Wren was on my case most of the time scolding and making the sort of growling, grinding noises they can produce.  He had been singing when I got there but soon stopped and started dogging me!… I saw or heard: Canada Geese (landed by the Ironworks as I got out of my car), Black-Cap Chickadees, Spotted Towhee, Stellar Jay, Robins, Song Sparrow, Crows and a Flicker. Next time I need to bring a pruning saw and better fitting leather gloves. My trenching shovel is very handy for digging out root crowns. It did take me a few minutes to learn not to trip over all the long prostrate grass and vines!  Almost went into the creek when I was girdling the English Ivy on that native ash next to the Springwater.” 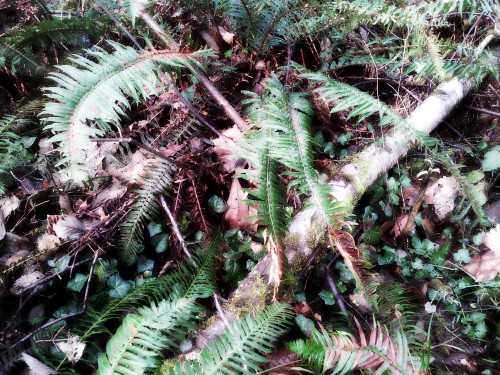 Before photo of sword fern by Patty Robards

“I worked in area 2 for 60-70 min.  Ivy pulling including a start on one of the trees with a less common type.  I would suggest working with the owners of [a nearby] house to eliminate ivy on their side. Till that, [Park Steward] Lora [Martin], and I will need to keep going back there regularly. Also I have put the yellow flags at a really sharp angle to the ground whenever I felt all had been pulled in that area at this time. Will help me know if I have pulled that area as we try to get through the fairly large area.” 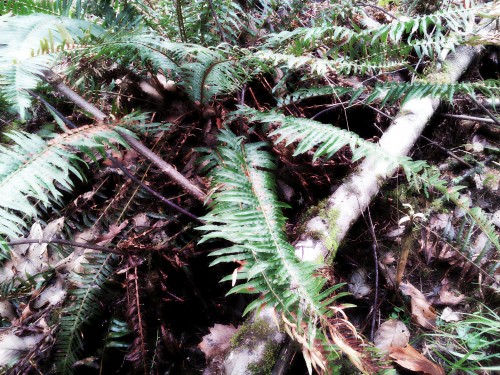 After photo of rescued sword fern by Patty Robards

“Went to Buttes on Sunday and tore out some blackberry.  Worked over the same area [Park Steward] Mike [Babbit] worked.  He got lots, but much remains.  Noted also that the twinberry honeysuckle live stakes I planted are sprouted.  This upcoming warm weather will test them for sure.”

“Powell Butte Nature Park area 1 – invasive species removal, primarily English ivy.  Temp was in the low 50’s, overcast and dry.  Began walking the trail, looking left and right until I spotted the first yellow flag and then headed off trail to continue.  I was amazed at how  he [Portland Parks Ecologist Mart Hughes] spotted some of the very small shoots!  I would pull them, and when I had a big enough bunch in my hand, found a likely crook in a nearby tree and placed the bunch there, ready to dry out and not have a chance to root again. I covered all of area 1.  The main garbage I picked up was glass bottles and some cans.  I did find an old metal wire crate off the trail which I will set aside for the scrap-metal guy who cruises the neighborhood on occasion. “ 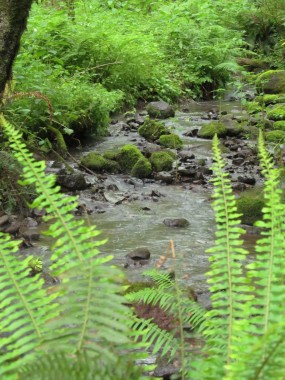 Deardorff Creek by the Schaeffer Family

“What another glorious day!  What a difference a month makes.  Last month we could easily see the floor of the area but everything is starting to come up and it is making it hard to pinpoint the ivy.  We did find a couple of little areas to work on but mainly focused on trying to locate garlic mustard.   We bagged the little that we found and brought it home to destroy.”