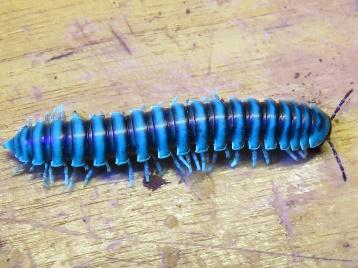 Over the past few years we have had the pleasure of working with a young scientist named Phil Nosler, who has been an all star in our community science dragonfly surveys. Little did we know he had another love-millipedes! This essay outlines a little bit of his work.

I am a student in the Portland area interested in a field of biology few people would recognize the name of: Diplopodology.  Yes, that’s a real word. “Diplopoda” is the scientific name for the arthropods more commonly known as millipedes. Most people are familiar with millipedes as the small, cylindrical or centipede-like bugs in backyard gardens, or perhaps the inch and a half long black species with yellow spots that you may see on a trail hike during spring or summer.  Millipedes are an old group of arthropods that are neither insects nor spiders, but belong to a group of their own called the myriapods (meaning “many legs”), which also includes centipedes and some lesser known many-legged creatures. Despite what their name implies, no species actually has one thousand legs, although one potentially endangered species in California has managed 750, which is by any measure a respectable effort.

Most of our local millipedes are to be found in the undergrowth of forested areas.  Turning over logs is a good way to find them, and sifting through leaf litter is also sure to turn up a few.  Generally speaking, most of our species are rather small, with only a handful exceeding an inch in length. Many also have good camouflage, which helps them blend in with the color of the leaves or the soil they inhabit.  Despite them sometimes being a challenge to find, it is always rewarding to discover one. The dull brown pest species common in gardens are luckily not representative of the appearance of the average millipede. Our local species may be variously bright orange, root-beer brown, brick red, lavender and light brown, striped, spotted, large, tiny, cylindrical, flattened, and often armored.  I consider myself lucky to live in a region with as diverse an assemblage of millipede species as we have (you can consider yourself lucky too if you feel like it).

Take, for example, a small species named Retrorsia leonardi, first introduced to science in 2003.  It is one of our most common and abundant species, but measures only about a centimeter in length.  To the naked eye it looks like a small, uninteresting white bug on a leaf; however, when viewed up close (using optical magnification), it looks as though its rough and jagged back is made up of icicles and the tips of its antennae are a distinct purple hue.  The millipede world is full of surprises like this.

I have been lucky enough to, with the support of Metro, Portland Parks, and the Johnson Creek Watershed Council, conduct my own informal surveys of these creatures in the Portland area, particularly in the Johnson Creek Watershed region.  In two or three years of doing these surveys, a total of 34 different species belonging to 15 separate families of millipedes have turned up, including one species whose existence in the wild had been somewhat of a mystery for the past century.  Surely many more species remain to be found. It is a group of animals about which relatively little is known, and much is left to discover.