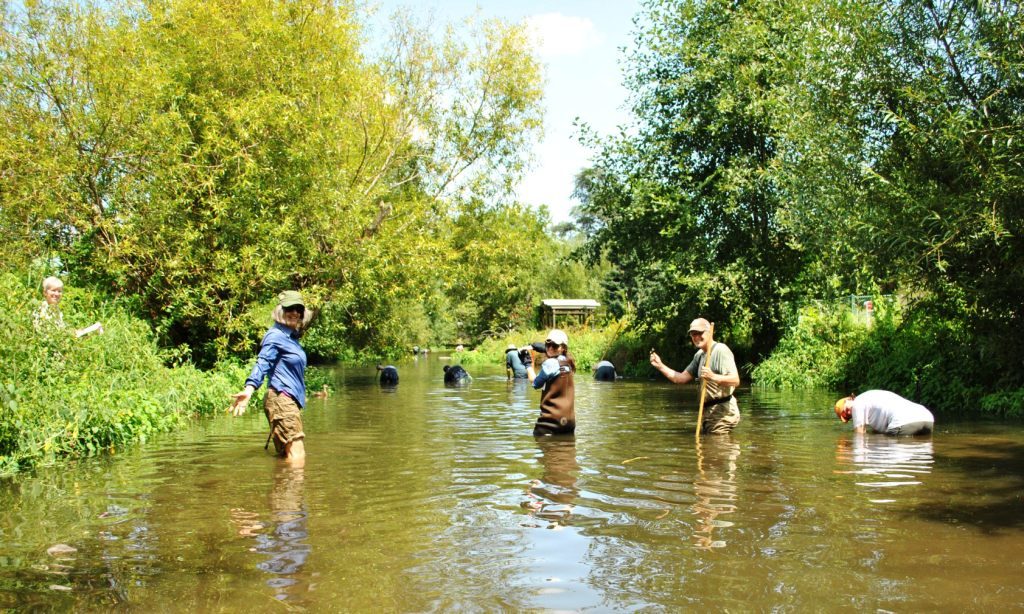 What is a “Salmon Sanctuary”, and what does it mean for Crystal Springs Creek?  In 2017, Portland City Council passed a proclamation making the September 24, the date of the Fourth Annual Salmon Celebration at Westmoreland Park, the first annual Salmon in Our City Day, and designating Crystal Springs Creek as Portland’s first official “Salmon Sanctuary”.  The Johnson Creek Watershed Council (JCWC) and the Crystal Springs Partnership (CSP) were recognized at the hearing and each awarded a grant of $5,000 to help continue the work to bring healthy salmon runs back to the creek.

“Salmon are now found in 125 miles of Portland’s 300 miles of stream.  That’s almost half.  And nowhere are those streams healthier than in Crystal Springs”.  Commissioner Nick Fish

Commissioner Nick Fish (in charge of the Bureau of Environmental Services) who introduced the item, spoke of the importance of salmon in our region and of the effect of poor urban planning upon them: “As our city was built out we made poor decisions.  We built culverts and eliminated habitat… in 1998 steelhead were listed as threatened under the Endangered Species Act, and in 1999 salmon were too.  It was our wake-up call, and since then we’ve made significant investments in salmon recovery and in our urban watersheds.” but that “perhaps our biggest success has been the restoration of Crystal Springs Creek”.

He went on to say that: “the Bureau of Environmental Services, the Portland Bureau of Transportation, the Parks Bureau, and twenty-one other public and nonprofit partners, like the Johnson Creek Watershed Council and the Crystal Springs Partnership came together and restored Crystal Springs over eight years, and today salmon can now swim the creek’s entire length.”

“We really wanted a way to celebrate our investment, to recognize the incredible community efforts that have gone into this restoration project, and to build momentum for continued improvements- there are more Crystal Springs Stories out there”  Kaitlin Lovell- BES

During the council hearing on September 20, Kaitlin Lovell (Bureau of Environmental Services- BES) spoke of the importance of salmon to the regional identity, and that “today Portland can stand tall because we have lived up to our commitments and are doing our part” and that with twenty-one partners “we create a culture and economy around restoration”  and went on to say “A Salmon Sanctuary is the result of public investments [in] restoration, rivers and streams in the city that have conditions for salmon to thrive” and that these conditions are based on ten quantifiable criteria for each stream.

Other speakers included Ronda Fast (BES), Judy Bluehorse Skelton (PSU Indigenous Nations Studies Program), Zac Perry (Reed College and CSP), Emily Roth (Portland Parks and Recreation) and Dan Kent (Salmon-Safe), and third generation creek-side resident Joe Mitchoff.  Joe spoke about changes in the creek over the years.  He and his family have witnessed the creek in health, in decline, and again in return to vitality.

Commissioner Fish and the other Commissioners each spoke in support of the item, Mayor Wheeler spoke in favor and read the declaration, and the items were passed unanimously.  Daniel Newberry (JCWC) and Karl Lee (CSP) received a giant check from the mayor who told them to “spend it well”.

The move was meant to bring attention to the very facts that salmon are native to Portland’s waterways, that they are still here, that they are endangered, and that people are working to bring them back to habitat they have been denied access to.  The declaration is as much a celebration of progress so far as it is a commitment to continued effort to bringing back healthy salmon runs in Crystal Springs and other Portland waterways.  Other potential salmon-bearing waterways include Oaks Bottom Wildlife Refuge, Miller Creek in Forest Park, and Tryon Creek.  The first two of these have had barriers to fish passage removed recently and removal of a barrier on the last has been approved by Congress in 2016.